It's been a while since I blogged, I'm not entirely sure where the time goes - I only wish the working week would go as quickly as the weekend!
Having been away on a weekend 'retreat' in Yorkshire where a wonderful fibrey time was had, I came home feeling a little deflated and decided to cheer myself up with a little present.
Whilst away I had had the chance to play with a resin spindle brought along by one of the lovely ladies, and I was smitten. So I wandered round the web and found Spincity UK and it wasn't long before this arrived on my doorstep 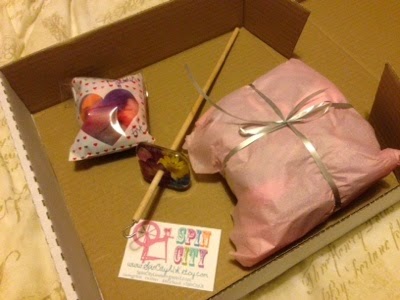 And inside was the most beautiful resin spindle 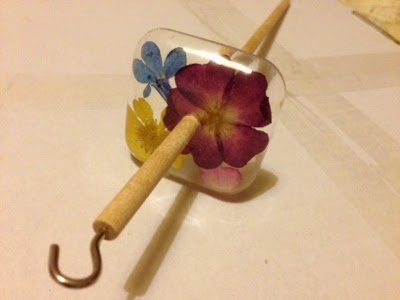 Don't you just love those flowers, and it's square! Yes, I know, a square spindle!
And whilst I was wandering round the etsy shop I decided it would be silly not to take advantage of the postal charge, but I was a good girl, and only the one braid fell into my basket 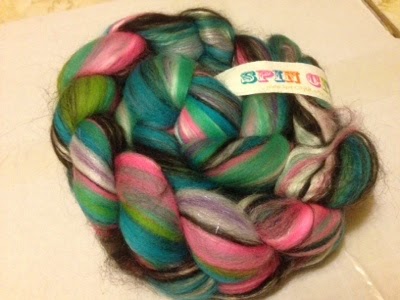 But oh my! The colours! They are even brighter IRL I can't wait to spin it but I want to spin it on my wheel and though I'm not entirely sure what has come over me I'm actually finishing off the fluff I'm currently spinning first!
Hopefully I will be back to show it soon
Posted by Modelwidow at 9:35 AM 1 comment:

It's the 1st of March, the sun is shining, the birds are singing (well mainly seagulls ! Weird since we are 30 odd miles from the coast, but there you go) and all is well with the world.
Isn't it amazing what a little sunshine can do. I wished for it in my last post and here it is.
To make the most of it, DH and I went on a walk this morning - our usual 6 mile trek, over the hill and far away, and I couldn't resist snapping this picture at our (flask of) coffee stop 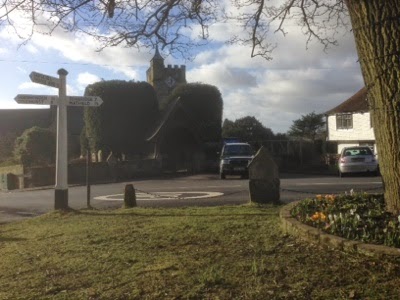 Ok so as DH, ever the photographer, pointed out, the sun wasn't really in the right direction, but I love the clouds, the twigs and the crocus.
Posted by Modelwidow at 5:50 AM No comments:

I seem to be drawn to items I can finish quickly of late, particularly hearts and hats. It's probably to do with the weather we've been having, neither one thing nor the other, it's cold but not freezing and seems to be constantly damp and dull - oh for some sunshine - so I'm finding satisfaction in producing something warm and comforting.
Talking of cold weather, DD spent a weeks holiday in Berlin celebrating a friend's 21st and, bless her, brought me back a ball of yarn as a holiday gift. The natural choice for one ball of chunky wool? - a hat of course 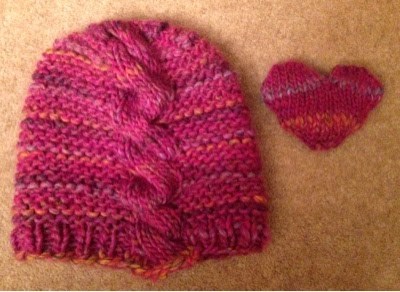 I combined a couple of patterns to get what I wanted and am so pleased with the finished hat, it fits well and is nice and warm too.  There was a little bit left over so I made a 'Don't break my heart' heart, a nice pattern on magic loop with minimal sewing up, I stuffed it with lavender (tied in the toe of an old pair of tights) to pop in with my spinning fluff to keep the moths at bay.
Continuing on the heart theme, for this months Tawashi I chose the 'I ❤️ Tawashi's' pattern and knitted it in DK held double to make it a little bigger 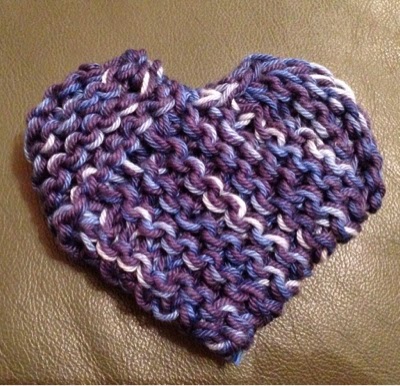 And as for hats... I've been using up oddments to make 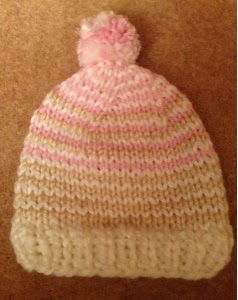 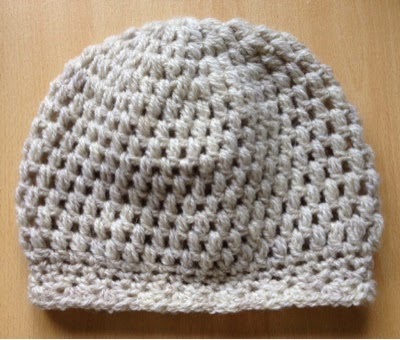 both knitted and crocheted hats for an as yet undecided charity (but most likely LILY - Love in the Language of Yarn for the Syrian refugees in Turkey)
As March approaches I'm looking forward to (hopefully) some brighter days and being able to be outside whilst it's actually still day light, (work has a lot to answer for) and perhaps I'll have something to blog about other than knitting for a change.
Posted by Modelwidow at 1:34 PM No comments:

In 2013 I took part in a year of dishcloths, making one a month with the Dishcloth Mania group on Ravelry. I've still got most of them, slightly faded but still doing their job. So last year I didn't join in at all. However, this year alternatives are being suggested each month - still for washing up but Tawashis as well as dishcloths and that's something I could do with, so here is January's 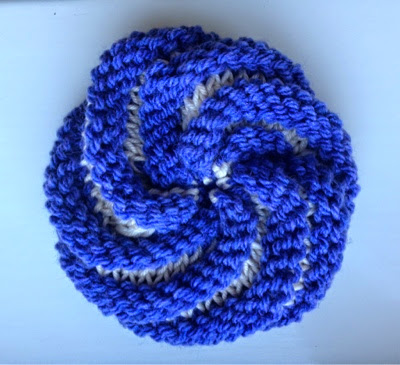 Two Tone Tawashi
KnIt on 4.5mm needles with purple ( yes it is purple really) acrylic Aran and two strands of a thinnish DK cotton for the contrast
Posted by Modelwidow at 1:07 PM No comments:

Lots of my friends and colleagues have been saying that 2014 was a fabulous year for them or a dreadful year depending - as far as I'm concerned 2014 has just been a year.
I've been very fortunate that nothing bad has happened, quite a lot of nice things happened too, but nothing that I would class as fabulous.
I had a very pleasant cruise to Norway in May, went to Woolfest for the first time and had an enjoyable holiday in the Lake District in June/July.  DD is much happier at this end of the year having given up her very stressful job as a shop manager (and believe me, it can be stressful) to become a Nanny to a lovely family who have taken her into their hearts. I was awarded overall Customer Service team member of the month at work, not bad when you consider the number of people in Customer service - and the best bit of that was having a car parking space for the whole of December!
And I finally bought a spinning wheel - something I had been wanting for ever.
I have my health, though there have been minor hiccups with ears and balance along the way but my brain scan showed that I do have a brain! and that it is "normal (for my age)" Cheek, I'm only 51!
My family remain well, independent and active and there are the same number of us at the end of the year as there were at the start .......
So maybe it has been a good year after all.
I always keep a record of the books I read to post in the last post of the year, (or in this case the first, since yesterday disappeared in a cloud of work and helping DH with the most fiddly of construction techniques on a model air plane all evening) so in keeping with tradition, during 2014 I read...
Fourteen books, which just goes to show I'm fairly consistent as I read the same in 2011, and 15 in 2012 and 2013.
And finally, a blog post should always have at least one picture (IMO) so here is my first attempt at spinning on Terri the Traveller using some Jacob Tops I bought from Wingham Wool Work. 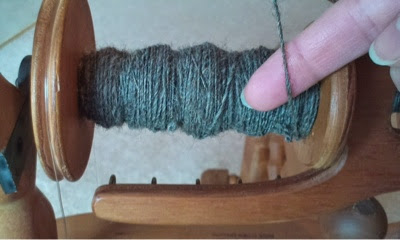 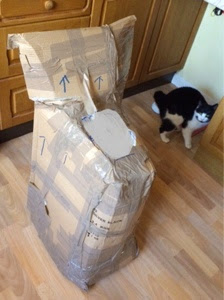 Hugo says, I really didn't know what to make of it, it looked a bit like a chair, but not a very comfy one, so I gave it a wide berth even if it was a little close to 'my corner' and I had to have lunch with one eye on the 'thing' .
Fortunately mum came home and let the 'thing' out of it's wrappings, I still wasn't sure, but it was a lot less scary, and mum seemed absolutely delighted - she may even have slightly overcooked dinner (judging by the burning smell) as she was so busy checking it out. She says it needs a bit of TLC but nothing she can't handle with the help of the Internet and those kind people on the forums she frequents - oh and she says with lots of smelly beeswax polish, well smelly to a cat anyway, it's going to be beautiful (bit like me really) but I'm not allowed to play with it, and it's definitely not for sharpening my claws on. 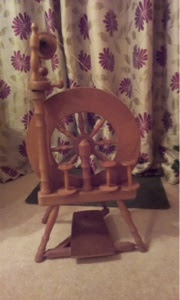 Can't wait to se what she makes with it - after all she only said I couldn't play with the wheel, no mention of fluff or yarn :0)
Posted by Modelwidow at 2:58 AM No comments:

I haven't been here for a while, far too busy wielding a crochet hook you see, making multitudes of poppies.
For the last three years AXA Purls (the knitting/crochet group I co-run at work) has raised funds for the British Legion by making and selling poppies. The first year we raised about £400, last year I openly declared that I couldn't see how we could possibly match that, let alone beat it .... We raised £1007! So this year I kept quiet! 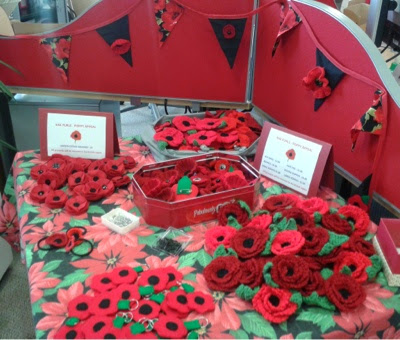 We had a lovely selection of different kinds of poppy items for sale in our 'Poppy Shop' - key rings, hair bands, bags and poppies of all shapes and sizes, knitted, crocheted and made from felt, all created by the talented ladies of AXA Purls and unbelievably we were able to present a cheque to the British Legion for .................. £1819.08!
(and subsequently gathered in a little more making the grand total £1850.19 - the odd 19 pence does amuse me since everything was priced in round pounds).
An incredible amount thanks to the amazing support from AXA Purls, our colleagues and the company.
Trouble is, the pressure is now on to beat that again next year - I'm already trying to think of new things to make.
Posted by Modelwidow at 5:59 AM 1 comment: